Ramadan is a month of patience and devotion for Muslims around the world. Each year they abstain from eating or drinking anything during the daytime throughout this holy month. The end of Ramadan marks the beginning of a full month of celebrations, with the first day being commonly known as Hari Raya Aidilfitri for those living in Singapore.  The Muslims will wear new clothes, decorate their houses, visit their relatives and organize various social activities to celebrate the joyous occasion. One of the most anticipated things during this festival is many home-cooked foods that almost every household will have. No festival is complete without delicious foods and Hari Raya is no exception! This post lists our top picks of the various dishes commonly served during Hari Raya. Delicacies such as cakes, sweets and biscuits are also readily available and enjoyed during the festival. We have previously written about our top picks and you can check them out here. 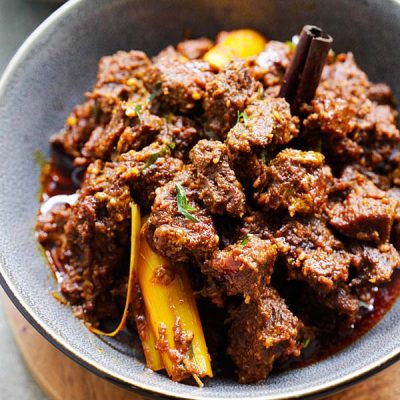 Rendang is a slow-cooked, meat-based dish with thick dry curry-like gravy. It is most commonly cooked with beef but some prefer to use chicken or mutton instead. One of the key ingredients that makes this dish different from normal curry is coconut milk. The meat is slow cooked for a few hours in coconut milk along with different spices like garlic, ginger, turmeric, onions, coriander, chilli and lemongrass.

This aromatic dish is originally from Sumatra and traditionally, people ate Rendang during long journeys in banana leaves. Today, Rendang has become a mainstay in Singapore Malay cooking and is a staple for special occasions like Hari Raya. Rendang is usually eaten with rice but usually people will prefer it to go with Ketupat and Bamboo sticky rice, or better known as Lemang, during the festive seasons. 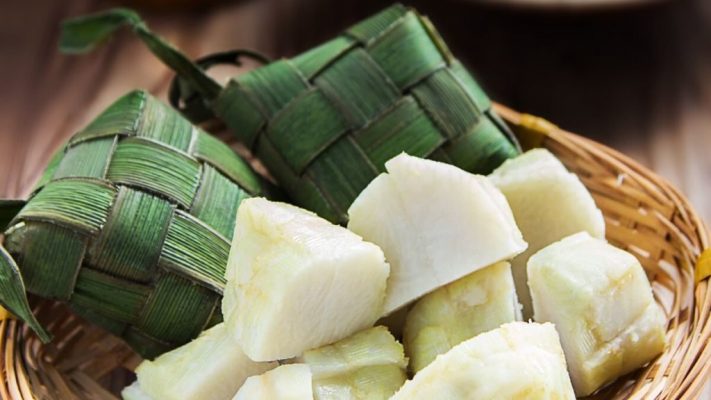 No list of Top Hari Raya dishes is complete without this traditional steamed rice cake. This is a signature item for Hari Raya it has to be mentioned in our list as well! To prepare Ketupat, coconut palm leaves are twisted in various shapes and filled with uncooked rice. The ketupat is then boiled till the rice is evenly steamed and cooked. Replace the coconut palm leaves with hollow bamboo stems and you get a variation of the Ketupat known as Lemang. Lemang is a type of sticky rice usually

cooked over fire instead of being boiled or steamed. Earlier in the write-up, we mentioned Ketupat or Lemang to be a perfect staple to accompany Rendang. As it turns out, they are also great to go with other robust dishes like Serunding, Satay and Sambal Goreng. 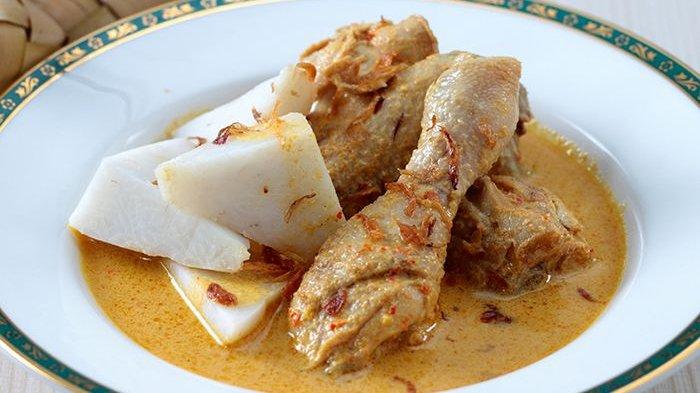 Opor Ayam is another dish having chicken and coconut milk as one of the main ingredients. This dish is very well known in the South East Asian regions such as Singapore, Indonesia and Malaysia. While the cooking itself may take some time, it is actually a pretty straightforward dish to prepare. It’s essentially chicken cooked in coconut milk, with a whole bunch of herbs and spices to make the dish more flavourful and aromatic. During the Hari Raya festivities, many families serve Opor Ayam alongside Rendang and Sambal Goreng to be eaten with Ketupat and Lemang. As the dish is quite mild and non-spicy as compared to other dishes, it’s often considered a child-friendly dish. 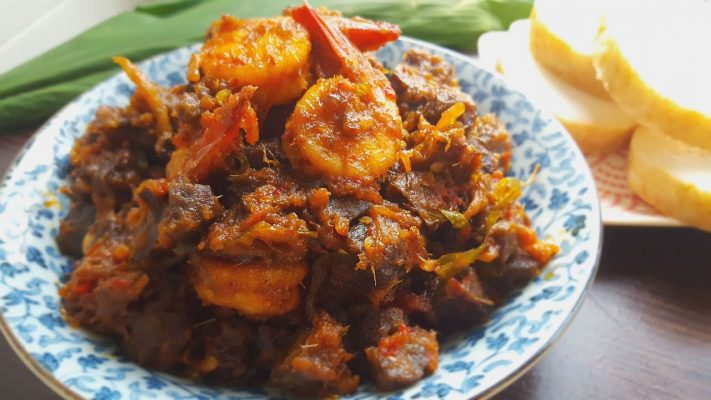 This is a traditional spicy stir-fry dish and is very common during celebratory functions such as Hari Raya and wedding celebrations. Sambal Goreng Pengantin is quite a complicated and tedious dish to cook as many of the ingredients have to be cooked separately prior to stir frying them all together at the end. These ingredients include beef lung, beef chunks, long beans, tofu and fermented soybeans, better known as Tempe. Other ingredients and herbs like dried chilli, onion and garlic, are also used. However, the amazing taste of the dish makes it all worthwhile. A medley of flavours fill your mouth as you take a bite of this dish; spicy, creamy, sweet, savoury and even a tinge of tanginess at the tip. You’ll definitely be asking for seconds! 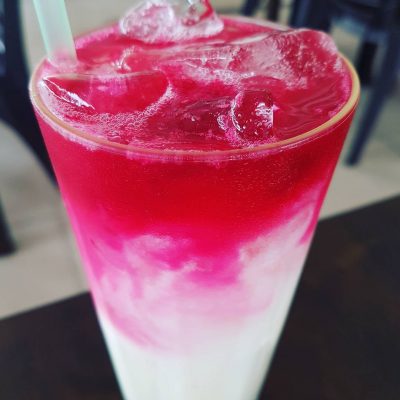 Every meal needs drinks to go along with, to quench your thirst as you satisfy your hunger with the food. Bandung & Katira are two of the most common drinks you will find during the festivities of Hari Raya. These drinks are also served over iftar during the month of Ramadhan. Not only do they taste amazing, they also have certain cooling properties, making them popular in this hot and humid region of Asia.

The main ingredients for Bandung are Rose syrup and condensed milk. Usually served over ice, this drink is also eye-catching as it has a bright pink colour, as a result of the combination of the above two ingredients. With such a unique colour, you can be seen unmistakably drinking Bandung from a mile away! As for Katira, it is made using the Katira Gum (Tragacanth Gum) which are dried tree saps of certain Middle Eastern legumes. The gum possesses many health benefits such as stroke prevention and the promotion of healthy and smooth skin. The gum is soaked for at least half a day and then mixed with other ingredients such as basil seeds, barley and evaporated milk to create a sweet and milky concoction commonly known as Air Katira. It is also usually served chilled or over ice.

These are our picks for the Top 5 Hari Raya Dishes commonly served in Singapore. Which dishes do you look forward to during Hari Raya? What’s your utmost favourite dish for Hari Raya? Which of these dishes will you be cooking for Hari Raya this year? Leave us a note in the comments section below!